Gender is one of the key issues addressed in the Sports for Development and Peace (SDP) sector, in particular gender-based violence and discrimination against women and girls. More attention has been paid on how many women are participating in sports for development programmes, how many women are occupying leadership positions in SDP organisations, and how much money governments and federations are allocating to women and girls in sport.

Around the world, women and girls are not encouraged to play sport and have been historically excluded from sport. Only in 2012 London Olympics were women finally allowed to compete in all the sports. Cultural and social barriers, plus the structure of sports, in terms of biases in decision making, has led to non-equal investment in women’s sports from the grassroots up to the elite level. Now, however, there is an incredible growth in women's sports taking.

Women's sports are both a human rights issue and a commercial value topic. As cultural barriers shift so does interest in sport for women. There has been an increasing interest from different audiences in women’s sport. The 2018 Nielsen report on the Rise of Women’s sport found that 84% of sports fans are interested in women's sports, and of those 51% are male. The Women's World Cup in 2015 had 750,000,000 viewers. Four years later, it had 1 billion viewers. Leagues are expanding broadcast partnerships for women’s games, there has been more diverse storytelling around women’s sport in the media, and sponsorships for women are also increasing.

Having policies and structures in sport set up with more diverse leadership and fewer conscious and unconscious biases is leading to an increased investment in women's sport. More diversity in decision making bodies leads to healthier decision-making processes and a more inclusive way of making decisions. It helps eradicate biases and ignorance. New sports like CrossFit, Skateboarding, and Surfing, as well as some women’s sports, like women’s Rugby, have started to adopt a much more gender-equal governance structure, as opposed to some of the older sports, like football, which having been started by started by men and played only by men for so long, have been slower to adapt.

People are becoming more comfortable stepping forward and speaking about topics of sexual abuse. These are issues that need to be spoken about, as only then can changes be made to protect and provide safe spaces for athletes and people working in sports. For Bex Smith, athlete’s health and safety must be a priority, but discussing topics like sexual abuse and harassment has until recently been hard because those in the leadership and decision-making positions often don’t have lived experience. More work is needed to raise awareness of the issues and to educate those in positions of authority in sport in how to manage and deal with these matters. Media can help.

Safeguarding must go beyond written policies and be incorporated into organisations’ practices. Funders have had a major role in ensuring that by the time they sign an agreement to invest resources in a community programme, part of those funds go to hiring people, building knowledge, and developing capacity to have efficient safeguarding measures in place. Organisations must also bear in mind that safeguarding measures must be constantly reassessed, evaluated and improved, because the sports environment is constantly changing.

Esports are defined as organised competitive video games, and have gained a lot of visibility through social media streaming platforms such as Twitch, and YouTube. Esport’s online nature has enabled connectivity across countries, and for it to emerge as means of overcoming pandemic isolation, and a way to celebrate diversity and build community. Although women are still under-represented in Esports, they have increasing access at a rate of about 8% growth per year. The Global Esports Federation (GEF) is focused on five universal values - equality, fair play, diversity, inclusion, and innovation – and committed to leveraging those among the more than 3 billion people involved in gaming and Esports in some capacity. For 2022, the GEF will look into safeguarding issues in Esport, bringing in world experts, civil society, publishers, game organisations, and other relevant stakeholders.

Other emerging trends in sport and human rights include disability inclusion, athlete activism, the inclusion of the LGBT community in Sports for Development and peace discussions, and the use of Sport for Development as a tool to take care of the environment. 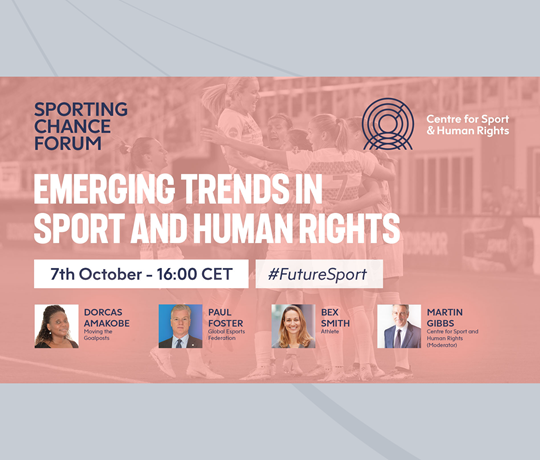