Sex and Gender in Sports Policy: a Human Rights Perspective

Transgender women and women with variations in sex characteristics are women and must have their human rights respected, protected, and upheld in the context of sport.

Even when sport governing bodies believe they have put all the necessary checks and balances in place, athletes, in particular transgender women and women with variations in sex characteristics, have been harmed and negatively impacted in and beyond sport due to by eligibility regulations. Integrating a human rights-based approach at the policy level helps sports bodies to assess, prevent, and redress harm when it occurs.

The main rights at stake regarding eligibility regulations are: the right to health; to privacy; to work; to bodily autonomy and integrity; to equality and non-discrimination; the freedom from torture and ill treatment; and of course, the right to gender self-identification and the right to participation in sport.

The two sport governing bodies who spoke on the panel are considering human rights in relation to the issue of inclusion – the IOC, has been working towards developing and implementing a human rights strategy, and FIFA, which has made a statutory commitment to human rights - both said that they are taking inclusion and non-discrimination as fundamental principles and a starting point in this discussion[1].

The IOC and FIFA’s human rights-based approach has led them to create multidisciplinary working groups, which not only engage medical and legal experts, but also human rights professionals, among others. They are also engaging in meaningful and extensive consultations with affected groups and other relevant stakeholders.

The IOC is releasing a new framework, that will help International Federations to engage in a decision-making process to set out their own eligibility criteria. A rights-based approach is a good starting point to reconcile allegedly competing values of creating a level playing field, fairness, safety, and balancing these with inclusion, and non-discrimination.

As FIFA reviews its eligibility regulations for their own tournaments, they are also considering providing guidance and education to their Member Associations on how to address this sex and gender policy issue in a human rights-compliant manner at the national level. It is hoped other International Federations may follow their lead, as it is not uncommon for international regulations to become distorted at the national level leading to further harms to athletes.

UN bodies are asking States to legislate and protect the rights of transgender and intersex people, and indeed States have acted in line with their own obligations to ban discrimination based on gender-identity or expression and on sex characteristics; this has direct implications for the sporting world. In some cases, we have witnessed national legislations blocking the implementation of international sporting rules on the basis of human rights considerations.

[1] After the Sporting Chance Forum, on November 16th, 2021, the IOC published the: IOC Framework on Fairness, Inclusion and Non-Discrimination on the Basis of Gender Identity and Sex Variations 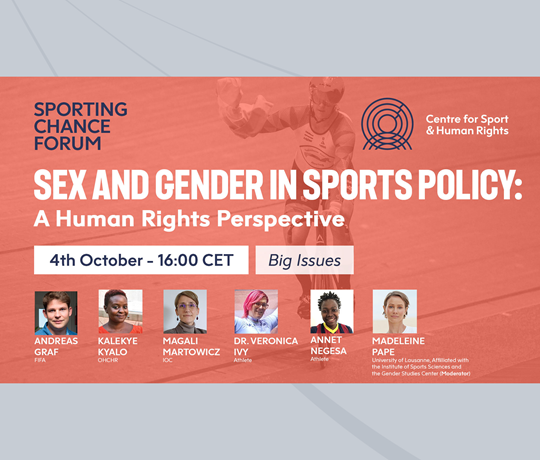 Side Event: Sex and Gender in Sport: the voice of athletes with variations in sex characteristics

Despite individuals always being different, athletes with variations in sex characteristics - who have been directly impacted by sport regulations - share some common experiences, including the need to feel more included and safer in the field of sport. Most of these women are attracted to sport because of the general belief that sport embraces everyone, however some say they have ended up feeling excluded and inadequate, and as though there are not “women enough”.

The Ghanaian footballer, Holali Ativor, for example, decided to leave school after being bullied by peers and teachers for her variations in sex characteristics. When she joined the Kumasi Sports Academy, she chose not to shower with her team-mates to avoid the same harassment she had suffered in her childhood. When she made it to the National Team, she had to submit to sex verification and was dropped from the team after refusing to undergo surgery. Even though FIFA’s regulations do require medical steps, the recommendation for surgery was a misinterpretation by the National Team.

After being banned from participating in the London Olympic Games for having high levels of testosterone, the Ugandan former middle-distance runner, Annet Negesa, felt like she had no other choice but to comply with whatever the national federation and the international federation suggested. She underwent surgery without prior informed consent, faced physical side effects, later discovering that she would have to take medication for the rest of her life, which led her to become depressed. Ten years on, she has been unable to make a sporting come-back and continues to wait for justice.

A Nigeran Olympian, Aminatou Seyni, was a 400-metres runner until she was banned from that event distance. According to the IAAF’s (now World Athletics) regulations, she could still continue running in 200-metre events. Her National Federation and national Ministry questioned why the same athlete was considered “woman enough” for 200 metres, but not for the longer distances. Owing to this confusion, they almost did not send her to the Olympics.

It has been challenging for athletes with variations in their sex characteristics to seek remedy when their rights are violated. In most cases athletes are not even aware of their rights or that regulations can be challenged. Athletes like Dutee Chand, Caster Semenya and Annet Negesa have been courageous in talking publicly about their stories and helping to ensure other young women and athletes who are experiencing similar issues in sport do not feel alone or unable to claim their rights. Dr. Payoshni Mitra has been putting athletes in touch with other younger athletes, so they can be supported and receive advice.

Advocating for sport bodies to adopt a human rights framework across their activities will be key, potentially helping them to reconsider and review their eligibility regulations from a human rights perspective.

Side Event: Sex and Gender in Sport, the voice of transgender athletes

Trans athletes are human beings in the first place and must be treated with dignity and respect. Despite what some people think around the changes in media and medical technology making trans people more visible, they have always been a part of a society. And they should be fully embraced and brought back into communities.

No single community is a monolith and trans people, and trans athletes are a diverse group.

Barriers faced by transgender athletes: discrimination from families and society in general; difficulty to find a coach that agrees to coach a trans person; lack of sponsorship; media articles focused solely on their gender identity, instead of on their talent and hard work; undergoing several medical tests; accusations of cheating; having other athletes refusing to compete against them; harassment; deadnaming; stalking; death threats; serious mental health consequences (e.g. developing depression, anxiety, and PTSD);

The majority of policies governing the participation of trans athletes in sport have been made by people from the global north who are, for the most part, cisgender, heterosexual, white men. These policies in the sports world disproportionately impact trans women and regulate the bodies of trans women and nonbinary people, and also disproportionately impact black, brown and indigenous athletes, and particularly athletes from the global south.

To require athletes to undergo any sort of medical procedure as an eligibility criterion for competition is a violation of bodily autonomy, which is a human right. The right to undergo sex reassignment surgery and the right to change their names, for example, is not assured to transgender people in all countries. Besides, not all trans women want to or can afford undertaking a medical transition to comply with sports regulations. Therefore, this should not be imposed on trans athletes through sport regulations.

The debate about trans athletes’ participation in sport usually places on one side fairness and on the other side, inclusion as if those are in opposition to each other, which is not true. Fairness requires inclusion. It is a demand of fairness to be fully inclusive and to not discriminate.

The argument that trans women should be banned because they take over women's sport immediately places trans women as not real women. And transgender women are women.

Not all women are being tested and subject to the same eligibility policy. Trans women and women with variations in sex characteristics are usually being singled out for not looking feminine enough, based on white women's femininity.

Sports organisations should help create cultural change. The question that should be asked is: what will sports lose if trans people aren’t included? Every sport should have a pathway for participation for transgender athletes, not a reason to exclude them. And so, if you are in a position where you do not yet have a policy, it is the time and long overdue, to create a pathway for trans and nonbinary people to have access to sport in a safe way, in a way that preserves their human dignity and their rights. In doing so, sport bodies need to make sure that they have trans and nonbinary people at the table, but also keep in mind that not every transgender athlete wants to be an athlete activist, and it should not be the responsibility of every transgender person to fight for their own rights in sport. National governing bodies, leagues, teams, and organisations need to be creating those pathways so that trans people don't have to defend their own humanity.

Transgender athletes want to participate in sport, defend their countries, become a role model to younger generations. They play sports for the same reasons as anybody else. It's because of their love of the game, the way they love to challenge themselves to be a part of something bigger than themselves, to find community and their own sense of self. Every person should have the opportunity to participate in sports.