The right to freedom of expression - as set out in international human rights standards -must be exercised responsibly. This does not permit expression that incites hate or violence or that is intolerant of other individuals or groups. The right, however, otherwise affords all individuals the ability to express their views openly and in a form of their choosing.

Without the ability to speak out and act freely on topics that are of concern, athletes are impeded from realising other human rights. In that sense, freedom of expression is an enabling right as it provides space for other rights to be realised.

Between 2020 and 2021, the International Paralympic Committee (IPC) Athletes’ Council led a consultation with Paralympians and Para athletes regarding freedom of expression. The starting point of this process was a recognition that the existing rules were too restrictive. Before the Tokyo Olympics (convened in 2021 due to Covid-19), the IPC Governing Board approved measures proposed by the IPC Athletes’ Council that could be practically implemented in time for the Tokyo 2020 Paralympic Games. Post-Tokyo 2020, and after an evaluation of the new measures, the IPC Governing Board will work with the IPC Athletes’ Council on its plan for the implementation of further recommendations at future Games from the Beijing 2022 Winter Olympic and Paralympic Games onwards.

A majority of athletes face or are affected by social issues but only a minority speak out. The Commonwealth Games Federation’s Athletes Advisory Commission has been working on an Athletes' Advocacy Policy that aims to allow athletes to fully express themselves. The common objective across all the actors of the Commonwealth Sport movement is to create a safe space where the rights of fellow athletes are respected, and athletes are empowered and equipped as agents of change and advocates for human rights. The policy will be published in advance of the Birmingham 2022 Commonwealth Games.

It is often hard to challenge the status quoin sport. There are concerns that athletes who speak out too often can encounter challenges in making it all the way to the top of their sport because they don't conform to so-called "sporting norms" based on ideas of discipline and obedience. The right to freedom of expression and the right to freedom of association are closely linked, and the latter can offer an important instrument to bridge the power imbalance that exists between federations, leagues, and clubs on one side, and athletes on the other.

Decisions affecting players directly on exercising freedom of expression should not be based on what a sport governing body thinks is best for the athlete or for the sport itself, but rather should be based on meaningful engagement with athletes and their legitimate representatives and international human rights norms.

The Centre for Sport and Human Rights can continue to play an important role to bring together athletes and other actors in the sport ecosystem to take stock of progress and ongoing challenges, and to advance the dialogue on freedom of expression in sport. 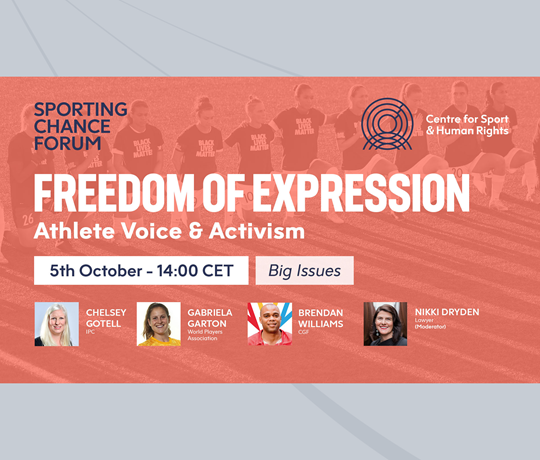