Safeguarding the Wellbeing of Affected Persons Throughout the Remedy Process

In the last five years, stories of widespread abuse have emerged across sports and continents. As a result, sport governing bodies have initiated a range of investigations, enquiries and disciplinary actions. These responses have often been heavily criticised by victims, survivors, whistle-blowers and human rights experts.

It is imperative that sport gets better at this. If affected persons and whistle-blowers don’t trust the remedy process this impacts not only on their right to remedy – it also prevents sports bodies from learning from mistakes and improving their prevention systems.

The main critical success factors in investigating and remedying abuse in sport identified by the speakers included:

1.  Committing publicly and unequivocally to finding out how things went so wrong, and show that you are willing to learn from the mistakes of the past.

2.  Changing the dynamics: sport creates inevitable power imbalances which often place athletes in positions of vulnerability, and at risk of abuse and exploitation. Sports bodies must proactively avoid replicating these dynamics in the investigation and remedy process.

3.  Acknowledging the pain and suffering of affected persons, and the wide-ranging and long-lasting impact of abuse:

4.  Recognising that affected persons were not protected when they should have been, and ensure those whose job it was to protect athletes are held responsible.

5.  Apologising for those failings and the extensive suffering caused.

6.  Offering victims and survivors an opportunity to be heard and to be part of the solution:

7.  Making systemic changes to prevent future harm, and communicate those changes clearly and regularly so victims and survivors know that others won't suffer in the same way.

8.  Taking not only a trauma-informed approach to investigations and remedy, but also an intersectional approach, recognising for example the gender dynamics in abuse.

9.  Investing time, energy and resource into rebuilding the relationship between affected persons and their sport, even if affected persons don’t want to be part of the remedy process design. Athletes who experienced abused have often sacrificed so much for their sport, and they often feel deeply betrayed and abandoned. Giving victims and survivors the chance to heal the relationship with their sport is part of effective remedy.

10.  Acknowledging that victims and survivors bear the greatest burden in the investigation and remedy process. They are asked to relive what is often the worst experience of their lives so that sports bodies can investigate, manage and govern sport properly. This takes a significant toll on victims and survivors, and at times places them and their families at great physical, mental and professional risk. This risk must be assessed at the outset, mitigated and regularly reviewed.

FIFA recognises that they don’t always get it right when investigating these complex cases. They are learning lessons when things go wrong and putting systems in place to educate and build awareness and understanding internally. Investigating and remedying abuse is challenging for sport institutions as they need to balance multiple competing interests. They also often face factors outside of their control, such as when working with criminal justice processes. To tackle some of these challenges, FIFA is proposing an independent, multi-sport entity, and is willing to put money behind the proposed process. FIFA is calling on other sport bodies to engage with and support the process, but intends to proceed with creating the new entity whether that support is forthcoming or not. 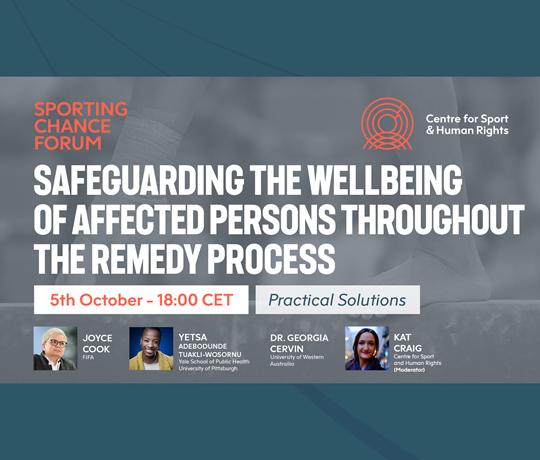