The Centre of Sport and Human Rights (CSHR) is delighted to announce that Guy Ryder, outgoing Director General of the International Labour Organization (ILO), will take over the honorary role of Chair of CSHR from 1 October 2022, as Mary Robinson concludes her term, becoming the organisation’s first Patron.

Mr. Ryder is a longstanding and committed supporter of CSHR, having personally addressed several Sporting Chance Forums and provided keynote remarks at CSHR’s launch in Geneva in 2018. A lifelong fan of many sports including football and rugby, as well as major sporting events like the Olympics and Paralympic Games, Mr. Ryder sees CSHR’s mission as critical to the betterment of sport.

The Chair of CSHR is appointed by the seven Members of CSHR’s Swiss Association, on the recommendation of the Board of Directors. The Chair serves an ambassadorial function to raise awareness of CSHR’s mission and impact with governments, sports bodies, inter-governmental organisations and foundations, and to work alongside and compliment the skills of the board and the team to maximise impact in the sports ecosystem by promoting key principles of good governance, inclusion and diversity.

Following her long support for and critical role in the conceptualisation, development and establishment of CSHR, Mary Robinson will become CSHR’s first Patron. She will remain involved in supporting the promotion of the organisation and its activities.

Guy Ryder said: The Centre for Sport and Human Rights has already achieved a great deal, and I’m proud of the role that the ILO has played in supporting the establishment of this much needed organisation. It’s been a pleasure to have followed CSHR’s development and growth over recent years as it works to engage all actors in sport with the clear mission of embedding respect for human rights across the sector. I know how important it is to provide a place for engagement and constructive dialogue within complex multi-stakeholder environments, and I’m looking forward to supporting an open and respectful culture of dialogue that brings more stakeholders to the table for this shared endeavour of promoting human rights in sport.

Mary Robinson said: I’m enormously proud of everything that the team at the Centre for Sport and Human Rights has achieved since we started this journey together in 2015. With CSHR becoming fully independent last year, and adopting an ambitious new strategy for the years ahead, we can pause to recognise substantial achievements in this foundation phase. A constant theme, and one that differentiates CSHR from many other initiatives, has been the ongoing focus on respectful and deliberate engagement across the world of sport. CSHR is the place for the entire sports ecosystem, including those who have significant challenges or have yet to make much needed commitments, to come together in a safe space for constructive conversations rooted in the application of human rights principles and standards. I’m so pleased to hand over to Guy, who has long experience in multi-stakeholder dialogue and action. I am happy to continue my support for CSHR as Patron and look forward to seeing the fruits of our dedicated work bear out - we truly need a world of responsible sport to be an ally and a leader in promoting the cause of human rights globally.

Mary Harvey, Chief Executive, Centre for Sport and Human Rights, said: It’s testament to our work so far that Guy Ryder is taking up the role of Chair after such a distinguished career bringing stakeholders together in constructive social dialogue to advance rights at work. We’re unique in having both the ILO and UN Human Rights Office as formal parts of our governance and place great value on their roles as the international standard bearers for human rights and labour rights. Guy is well known across the UN system for his leadership and commitment to tri-partite-plus engagement. He has also overseen the ILO’s groundbreaking work to support labour reforms in Qatar ahead of the 2022 FIFA World Cup. I look forward to working with Guy as we seek to live up to Mary Robinson’s vision for CSHR. I thank Mary on behalf of everyone at CSHR for her moral and strategic leadership. Her influence and impact runs through our work, and we’re delighted to acknowledge her as our first Patron.

Guy Ryder first joined the International Labour Organization in 1998 as Director of the Bureau for Workers’ Activities. In 2002, he was appointed General Secretary of the ICFTU, leading the process of global unification of the democratic international trade union movement. He was elected as first General Secretary of the International Trade Union Confederation (ITUC) when it was created in 2006. In September 2010, he came back to the ILO in Geneva as Executive Director, responsible for international labour standards and fundamental principles and rights at work. He was elected as ILO Director-General in 2012 and re-elected in 2016.

The first woman President of Ireland (1990-1997) and former UN High Commissioner for Human Rights (1997-2002), Mary Robinson is a passionate, forceful advocate for human rights, gender equality, women’s participation in peace-building, and human dignity. Mary Robinson has been a member of The Elders since the group was founded in 2007, and was appointed its Chair 2018. A former President of the International Commission of Jurists and former chair of the Council of Women World Leaders, she was founder and President of Realizing Rights: The Ethical Globalization Initiative (2002-2010) before launching the Mary Robinson Foundation – Climate Justice (2010-2019). She was the founding Chair of the Institute for Human Rights and Business (IHRB) from 2009 until 2012, where she remains a Patron. From 2015, Mary Robinson chaired the Mega-Sporting Events Platform for Human Rights, becoming the Founding Chair of the Centre for Sport and Human Rights in 2018. She was Chancellor of Trinity College Dublin from 1998 until 2019.

Launched in June 2018, the Centre for Sport and Human Rights works towards a world of sport that fully respects human rights by sharing knowledge, building capacity, and strengthening the accountability of all actors through collective action. 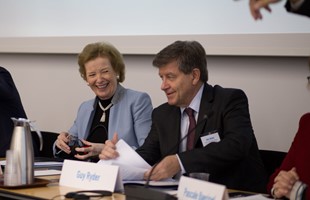